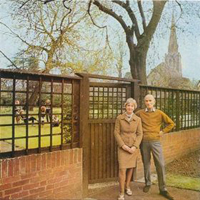 The third album from these English folk rock legends.

Both are in free flow on this forty minutes, eight songs long album. Sandy's vocals are wonderful while Richard does a brilliant job on guitars and everything else with strings he could get his hands on. They are very much supported by bass, backing vocals, fiddle and drums.

Folk rock is a genre which was and still is pretty limited in it's expression. This album is pretty much pushing the envelope in this genre and musical expression. The eleven minutes long A Sailor's Wife is Richard in full flow on his guitars and strings. A genius at work, no less. That goes for a lot of other songs too. Although I love Sandy's voice, I have to admit this is Richard's album. Sandy does some stunning vocals on this album too. The opening song Genesis Hall is her in full flow. Her best song is Who Knows Where The Times Goes where her vocals is simply stunning.

The rest of the album is not up to that standard. A couple of songs are throwaway songs and barely fillers. This leaves a very good album which I really like a lot and which rekindles my interest in a band who can only be called legends. A band who every year is staging the Copredy festival and a lot of good things for the British music scene.