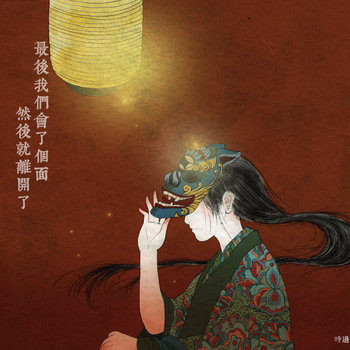 It is a great feeling when I discover a new band and a new album which really surprises me. This is why I run this blog and it is a pleasure to do so.

Summer Fades Away is a post rock band from China. Yes, I always thought post rock was something Sigur Ros and their Arctic brethren did best. Post rock should have a spine-chilling cold blast in it's core. Then, Summer Fades Away comes along and I am not so longer sure about that.

Maybe this is their first album although I believe they released a 3 songs EP in 2011. Three very long songs. I do not know, but I have tried to establish a bit of contact with them.

Anyway.......  We Meet the Last Time​,​Then Departure is a three quarter of an hour long instrumental post rock album with a bit of uneven sound. From a hardly decent to a great sound. You get the normal post rock stuff in the two opening tracks. Cascades and pastoral melodies. Ebbs and flows. Then the album takes an unexpected twist and starts to include Chinese classical and folk music. That includes Chinese instruments and sounds.

The blend of post rock and Chinese sounds is perfect on this album and that makes this a post rock album on par with what Sigur Ros has come up with during the last years. Pity about the not so great sound, but the quality still shines through. This makes We Meet the Last Time​,​Then Departure a great album by every standard.

There is no doubts China has produced a great band in Summer Fades Away. Perhaps their greatest band and it needs to be exported to the rest of the world. This is a great and very beautiful album which needs to be heard to be believed.