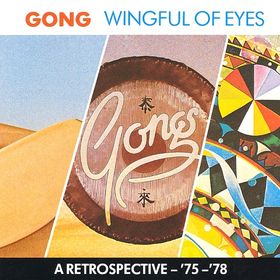 Wingful of Eyes is a career retrospective, covering the post Daevid Allen albums Shamal, Gazeuse and Expresso II. Three good albums in it's own right.

I think these three albums stands perfectly well on their own feet and should not be chopped up as a food dish. But this budget album was probably a good idea anyway. The music here is jazz and fusion, the Pierre Moerlen way. Steve Hillage is also present here.

The end result is a good album, well worth the purchase if you can find a cheap copy. Those who already have the three above mentioned albums should not bother.