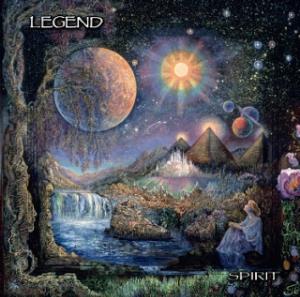 The fifth album from this English band who sounds like nobody else. A truly original band.

I became aware of this rather obscure band, who for some reason I don't really understand is described as a neo prog band, through their excellent 2011 album Cardinal Points. An album that blew my head away and it did not take me long time to purchase Spirit too.

A rather inspired choice as it turned out. Due to some unspent Amazon credits, it only cost me two quid anyway. The mother of all bargains. I was smirking like a cat who had just caught and eaten a finch.

Spirit is a bit different from Cardinal Points again. At first glance, make that first listening session, the band sounds like they have gone gothic rock with female vocals & co. In Beck Sian, the band has one of the best vocalists in the scene. Her vocals is very Kate Bush'ish at times. Her range is so big that she can quickly move from one expression to another. In her voice, Legend has something that can only be described as a battle ship among canoes. She easy goes into my top five best female vocalists ever. That among the likes of Kate Bush, Sandy Denny and Annie Haslam.
Her voice is also pretty theatrical at times and reminds me about Christian Deschamps in Ange.

Legend and this album is not only about her. The theatrical and operatic music reminds me about Ange and that French theatrical symph prog scene. What at first glance comes across as gothic is in fact theatrical symphonic prog. While that was the dominant scene in France, England just across the water has not had many of those bands. From the top of my head, Legend is the only band I can remember in this scene.

Hence.... Spirit is really an opera. Not like one of those concept albums the likes of Ayreon and others release without using operatic vocals who covers all vocal ranges. Spirit is a REAL rock opera where Beck Sian and the rest of the band covers all bases. Besides of their sound sometimes being really majestic big, the band also knows how to undress the soundscape and become more pastoral minimalistic. Spirit is an album where darkness follows light, where the grandeur soundscapes sometimes gives way to more pastoral simplicity. That is where the strength is and that makes Spirit a pretty unusual album.

It also makes Spirit a great album. Beck Sian's excellent vocals is already mentioned. The rest of the band also shows up with some great guitars and keyboards runs. This supported by great bass and drums hooks.
The melodies are also great and the mix of shade and light is a great asset to this album.

Spirit is one of the better albums from this year and is highly recommended.