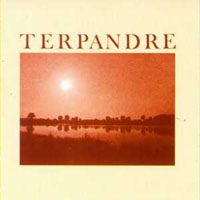 Another French band who released an album and then were disbanded.

Which is a bit pity when it comes to this band. They released this album in a year where prog rock were as popular as a nuclear attack. The lack of an audience may be the reason why they gave up. I am very glad this album was re-released on CD some years later.

To the music though. Terpandre is a fifty minutes long instrumental symphonic prog album which comes across as a mix of Camel's epic Snow Goose, a bit jazz, folk and a lot of French symphonic prog. Ange springs to mind, even without the vocals. The music is romantic and it is performed with mellotrons, synths, guitars, violins, bass and drums. Although divided into five songs plus two live songs, this album is in effect one long symphony. A pretty innovative and unusual symphony which clearly has it's own identity and sound. A great sound, btw.

The result is a very good album which is lacking a great piece of melody to elevate it to something greater again. I really like this album and in particular the mellotron parts. This is indeed a romantic, slightly melancholic symphony well worth checking out.