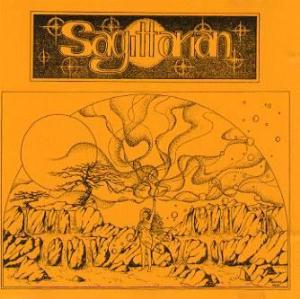 Another one album only band. I evidently have a lot of those albums in my collection. Obscure from bands you have to be barking up the tree mad to be interested in. Hence my interest in them.

Sagittarian is from Japan and released this album to a thundering silence in a year where prog rock were as popular as pestilence. Which explains why they gave up. The six members are probably doctors, teachers and accountants now.

Sagittarian is an album performed by no less than three synths, electric guitar, bass and drums. Some sporadic vocals can also be found here. The sound is a bit substandard. The music is a mix of neo prog and symphonic prog. They are difficult to pinpoint. I would label them as melodic neo symphonic prog. Melodic without that many good melodies.

This is a decent to good album which suffers from quality in all departments. It is well worth checking out, but not worth spending much money on.