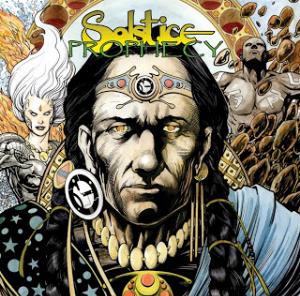 The band had been lumped into this neo prog crowd by the prog authorities. Personally, I don't find anything neo prog in this band. They and Legend occupies their very own genre. You can also add Iona to that genre too.

Solstice's new album Prophecy is continuing in the same form as their previous albums. That is flowery hippie like fusion of symphonic prog and folk rock. Andy Glass guitars is still prominent here. So is Emma Brown's vocals too. They are supported by keyboards, bass and drums. Emma Brown sings beautiful. The sound is great. The music is very symphonic and there is also a great deal of celtic folk music here. I think they have moved a lot closer to the likes of Mostly Autumn here. Not to mention The Reasoning and Iona too.

The end result is a very good to great album from a band I think is criminally underrated and overlooked. It is also a very long album too. Seventy-seven minutes is value for money. Not everything here is great and this album is not as good as their 1993 album New Life. It is still a great album, well worth checking out.