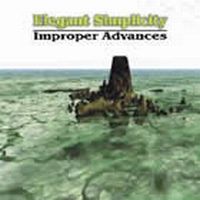 Improper Advances is the debut album though and it is basically Steve on his own with electric guitar solos supported by his own keyboards, bass and drums. I believe both bass and drums was produced through synths. It feels like it.

The result is an hour with ten guitar solos compositions. The sound is not particular good as this was a cassette album. It still is, btw. Some of the compositions are rather good. Others are not. It is a debut album from a man who tries to find his own style. A style later abandoned and this album is not representative for his later work. It is a decent debut album. End of it...