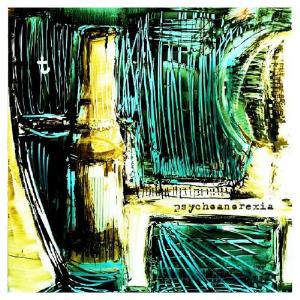 The fourth album from Thomas Thielen from the band Scythe who also release albums under the moniker T.

There seems to be various sub genres within the neo prog genre these days. Some tries to sound as commercial as possible, preferable with a female vocalist. A sure winner. Others again tries the prog metal route. Also a winner. Musicians like Thomas Thielen and mostly German bands tries the melancholic, still very majestic route.

Psychoanorexia is a majestic album with a lot of soaring guitar solos, great keyboards runs, piano, bass and drums. And let's not forget; Thomas excellent understated vocals. That is a good recipe for creating moods and ambiences. A bit ebb and flows, symphonic drama and time to let the melodies develop over a long time. Which he does on this almost seventy minutes long album which is divided into four songs. Four suites, I think it is right to call them. Three of them are twenty minutes long. The fourth song, make that song three on the album, is only ten minutes long. I think it is still only fair to regard this as one seventy minutes long piece of music.

The sound is excellent and the album is both an immediate hit and a grower at the same time. It grabs hold on the listener from first minute, but it still needs some listening sessions to really sink in properly.

There is no really killer tracks here. Nevertheless; this is a great album and one heck of a classy neo prog album. It comes highly recommended.