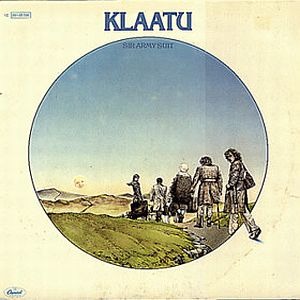 The third album from this Canadian band who were accused for being The Beatles in disguise. Well, they were not.

Their previous albums were very much The Beatles anno Let It Be with some symphonic prog influences. Not unlike Electric Light Orchestra. On Sir Army Suit, they have stripped away this and ended up with pop rock in the vein of The Beatles. I would also add The Madness here as a good label too. Although The Madness appeared long after Klaatu had been disbanded, some of the music here sounds like The Madness and the more poppy end of the new-wave scene.

The songs here is not too bad. Some of them are catchy too. It has this bubblegum factor and this album leaves no aftertaste. It is a decent album though. Fans of The Beatles may want to check it out.