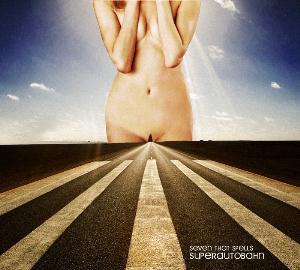 The tenth album from this Croatian space rock band.

Three compositions, one hour long album. That is what we get here. When listening to this album before reading the credits, I thought this music sounded like if Mr. Kawabata Makoto from Acid Mothers Temple had worked with the band on this album. Guess what ? He is the guitar player here ! That explain why this album is such a racket, such an hour full of distorted space rock.

The first song The Wall is a pretty chaotic songs which leads nowhere. The second song The Pyramid is a pretty melodic, slightly distorted three bars bass line with tonnes of distorted guitars and saxophones on the top of that. For twenty-two minutes, that is. The best song here by miles. The final song The Colossus is a more heavy song again where chaos reigns and there is a bit more melodies in swing.

The end result is a very heavy, a times very chaotic space rock album which have a pretty basic rhythm structure upon where our Japanese friend Kawabata Makoto uses to unleash terror with his distorted guitars. For some reason, this album actually work. This is actually a good album and I like it a lot. Check it out if you can.