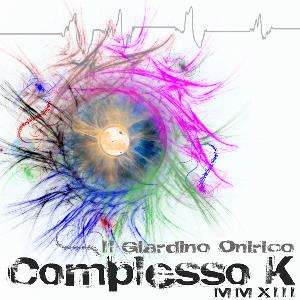 The third album from this Italian band and the follow up to their Perigio album from 2012. An album I thought I had reviewed, but I cannot find the review anywhere so I have to go back and see if I got the album. I believe I got it. Their new album is loosely based on their first album Complesso K from 2010 and cannot really be described as an entirely new piece of music. I have yet to hear their 2010 album too.

This album is also based on prog rock. But with a modern twist. The music is mainly instrumental with some very sporadic vocals. Style wise, this is post-metal, post-rock. Somewhere in the borderline between those two genres. You get the whole post-metal spectrum here with some chugging guitars and keyboards on the top of bass and drums. Then you also get some typical post-rock ebbs and flows genre signatures. The music is pretty experimental too. The final minutes have some traditional prog metal stuff with vocals and it all.

There are five songs on this forty minutes long album plus an intro. The songs are called Parte I-IV where Parte IV is the best song here and the one with the most traditional prog metal structures.

The end result is a pretty good album which fails when it comes to good songs. Call me old fashioned (I am), but this album is not for me. It is a decent to good album. It is one to check out if you are more into post-metal or post-rock than I am.