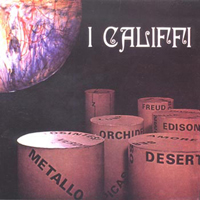 The second album from this Italian band who in total released four albums... so far. Maybe they are still around.

I Califfi was a member of the pretty big and active Italian beat scene in the late 1960s. As many other beat bands, they saw where the wind was blowing and turned into an Italian progressive rock, RPI band. Fiore di Metallo is said to be their only prog rock album though. I have no idea how their three other albums sounds. I guess their debut album was a beat album.

The music on this album is performed with organ, synth, piano, percussions, guitars, bass and drums. That and some very good vocals and vocal harmonies.

The band announces their new style on the first song, the pretty catchy Nel Mio Passato. The best song on the album is the title track though with a very good hook and melody. Their new style, their style on this album only is a mix of beat and prog rock. Mostly prog rock, but the band is not completely giving up on the beat music. They have also mixed in some Italian pop music, hard rock and some classical music into the mix too. ELP, Deep Purple and Le Orme springs to mind.

The end result is a charming, pretty catchy forty-five minutes long album. It is also a good album which should satisfy the cravings of every RPI fans out there. I really like this album and would recommend it.