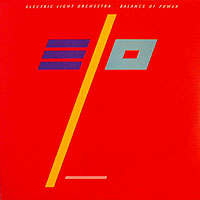 The seventeenth and final true Electric Light Orchestra album before the band split into two bands. Bev Bevan released two albums under the the ELO II name and Jeff Lynne one album under the ELO name. But Balance Of Power is their final album.

Gone has the orchestra and much of the lights two. Gone has what made the band so good too. What's left here is half an hour with some light bubblegum pop music made by some highly annoying synths, some substandard vocals from the usually dependent Jeff Lynne, some pretty dire bass and drums + a pretty flat sound. It sounds like a Roy Orbison album and I am pretty sure he also guests on this album too on one song.

There is one good song here and that is the five minutes long Getting To The Point. A good ballad, indeed. The rest of this album is an utter waste of time and space. It is almost turkey material. It is a sad end to this band.