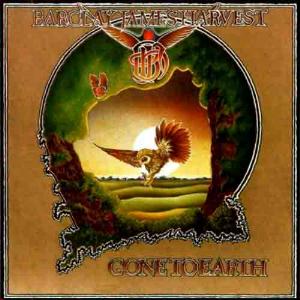 The eight album from this British prog rock band.

Barclay James Harvest was a band who in 1977 still had a pretty good 1960s sound. Their music is very much still stucked in 1967 or there about. It is rock with some references to symphonic prog. One of the funnier and better songs here is "Poor Man's Moody Blues" which is exactly what this band has been labeled. A label they will never get rid of. The song is pretty similar to Moody Blues most known song and a spoof song. Still a very good song which brings out the symph prog side of this band.
Personally, I no longer regard BJH as a poor man's Moody Blues. I think BJH has their own style and character.

Taking about labels and comparisons, on other songs again on this album, the band sounds a bit like The Beatles. This is why I rather regard the likes of BJH and Electric Light Orchestra as The Beatles illegitimate children.

Back to this album.... The sound and music on Gone To Earth is good. I am missing some great tracks here. This is still an enjoyable listen and one album I will listen a lot more to in the future. This is a good album.