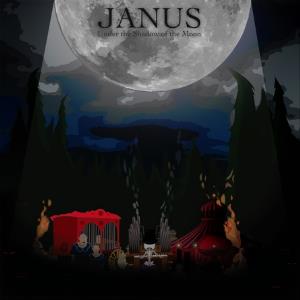 The tenth album from this British band whose the 1972 debut album Gravedigger is still regarded as a classic album.

Janus has been releasing new albums on an irregular basis and has got a pretty loyal following. I have yet to sink my teeth into Gravedigger so I barely know this band. Under The Shadow Of The Moon is indeed my first meeting with this band.

The music here is mainstream rock with a pretty major psychedelic rock and folk/country rock edge. This is by all means a very English album with guitars, saxophone, keyboards, bass, drums and vocals. Some of the music is also pretty folk halls influenced. Good references is David Bowie.

The guitars are pretty good and the main good thing here. The music itself is not particular good on this one hour long album. I find it boring and uninspiring. Hence my not so generous points. It is a safe album though.