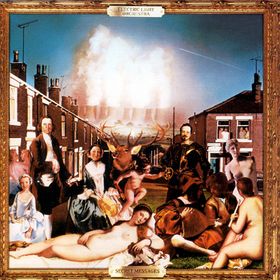 The eleventh album from this English band.

This band have had quite a remarkable career, being mixed up with the disco scene for a while too. They originally started up as an orchestral version of The Beatles and they have returned to their roots on this album too. Gone is the disco flirtations. But gone is also their naive late 1960s/early 1970s sound too.

What remains is a pretty ordinary album who fitted into the scene at that time. Pop rock in other words based on songs and songs alone. Jeff Lynne was not so lucky in this respect on this album. The sound is good, but the songs are not.

This one hour long album has a couple of good songs in Bluebird and Letter From Spain. The rest is cosy, nice but only decent. The band is out of form here, but is still showing signs of improvements.