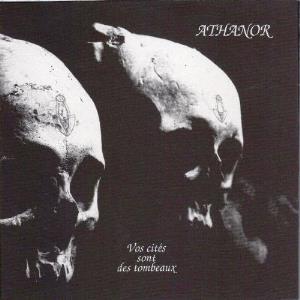 The the second album from this French avant-garde band. The first album Vulv'Air from 2008 is available as a free download from here from where you can also purchase this album from. I will review Vulv'Air in due time too.

Athanor gives us one hour with chamber orchestra avant-garde music of the more extreme kind. The band uses saxophones, female soprano vocals, cello, clarinet and numerous other instruments. They also list Univers Zero, Present and Magma as their main inspirations too.

Well, so far so great. I don't find much influences of the above mentioned bands in their music. That was the reason why I bought this album, btw. I had expected a very claustrophobic dark avant-garde album. This album is surprisingly light and airy. If the band has tried to capture the darkness of the likes of Present, they have failed. There is not much unity in this album either. The concept is more dissonant than the music. That is not a good idea when it comes to avant-garde music. Some sporadic pianos scattered around the soundscape with female vocals, sampled voices and various other instruments in a disorderly fashion is what we get here.

Maybe this album is too avant-garde for me who likes Present's music. I am a bit lost on this album. I just don't think it is anything more than a decent album. Sorry !