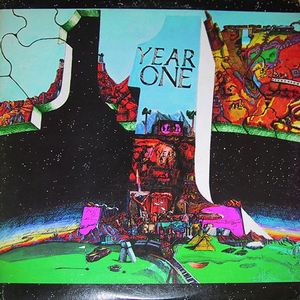 A one off album from this US band who broke up just after the release of this album.

Year One was the remnants of the US band Fantasy who released a self titled album in 1970. A pretty successful album too. So they broke up and Year One was formed.

Year One was a four piece on this album. The lineup was guitars, keyboards, bass, drums and vocals. When it comes to diversity, this album probably takes the biscuit as the most diverse album I have ever heard. In a matter off sixty-four minutes, this album features funk, folk rock, fusion, country, symph prog, AOR, rock, stadium rock and hard rock. It is like listening to an album sampler from the likes of RCA, Atlantic or EMI.

This is off course it's biggest weakness. It is too diverse by many, many miles. OK, it is a double album, four LP sides. Still, large parts of this album is cringe worthy.

Then again, large parts of this album is pretty good too. Hence, I am rating this as a decent album. But be forewarned. This is not an easy listening album.