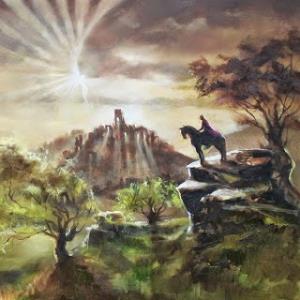 The second album from this English band and the follow up to the rather good 2011 album Frequencies Of Day And Night album.

I gave that album a 3 points rating and advised them to try harder. Well, I have to admit they have tried harder and have come up with an album which genre wise takes a lot from the likes of Foreigner, Rush, Yes, Genesis, Marillion, Arena, Asia and Pink Floyd.

The band is a five piece and the lineup is the usual vocals, guitars, bass, keyboards and drums.

The music is pretty dramatic and melodic with a lot of pomp, circumstances and symphonic prog thrown into the mix. And this album is a mix of everything you can throw at a listener when it comes to melodic prog and pomp rock.

The album is almost an hour long and it is a grand tour of music. I am not the biggest fan of Alan Taylor when he goes over the top in his pomp and dramatic vocals. It is best when the likes of Christian Descamps does this type of vocals as French is a language best suited to drama. The English language is not and dramatic vocals falls a bit flat on it's face when sung in English.  I like it a lot better when Alan Taylor is a lot more earthly and not so dramatic.

Most of this album is instrumental anyway and the band is doing a great job. So is Alan Taylor, too. Just to have said that.

There is no really great songs here. Nevertheless, this is a very good album from one of the brightest hopes in the British prog rock scene. Give us more albums and gigs, please. And keep up your good work.