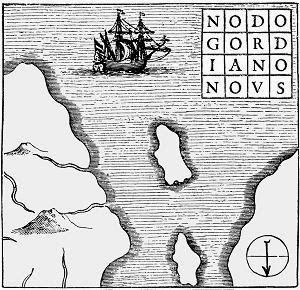 The fourth album from this Italian prog rock band.

Nodo Gordiano is a bit of an untraditional prog band as their music is much more ambient and post rock like than the vast majority of the Italian bands. Well, at least on this album. They were much more like Picchio Dal Pozzo on their previous album Flektogon from 2009.

One of the reasons may be the change of band members since 2009. The founding member is still here, but the band has got some new members. The line up is also a bit different.

Their new music still has a bit of King Crimson in it's core. But add some Pink Floyd and cinematic music too and you get the drift.

The album starts very slowly and not so impressive. It is a slow grower during it's fifty minutes and it does not really start to get into full bloom before twenty minutes or so.

The music is slow and based on guitars, keyboards, bass, drums and some vocals. Add glockenspiel and sound effects too.

Some of the music sounds like soundtracks. Some of the music is much more not so soundtrack sounding. The end result is anyway a very good album from a band who are going their own ways and is not conforming to this Italian progressive rock label. A band I really respect. Get this album.