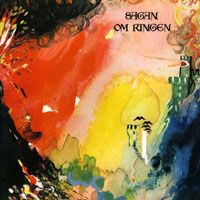 The debut album from this legendary Swedish composer and musician. He sadly passed away five years ago after years of serious illness.

Bo Hansson wrote and recorded this album many years before Tolkien became fashionable in the music and movie world. He deserves a great deal of credit for this.

Bo Hansson was in many ways a pioneering musician too and he got a hit album with the English version of this album two years later (through Charisma).

Bo had help of four other Swedish musicians on this album. They contributed with congas, flutes, drums and saxophone. Bo plays mellotron, organs, keyboards, bass and guitars on this wholly instrumental album.

The music here, unsurprisingly, is a mix of Mike Oldfield, ELP and some fusion. It is both introspective and melodic at the same time. Some of the music here is very good. Others not so good. I do understand why this album is regarded as a classic album by some people. It is most certainly a fascinating album which has raised my interest in Bo Hansson. The music is so full of adventure that Tolkien himself must have approved every single tone of it if he had heard the album. Check out this album and experience this thirty-five minutes long adventure yourself.