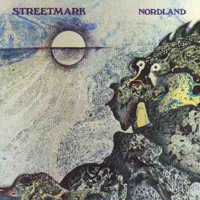 The debut album from this German band. A band who went on to release in total five studio albums although their third studio album was in essential the same as their second studio album. No, I don't understand this either.

Streetmark was a very obscure band, mostly known as the band where the brutally murdered (by two drunks one night) Wolfgang Riechmann played.

Streetmark was a five piece band with keyboards, guitars, drums, bass and vocals. The vocalist Georg Buschmann gained notoriety because of the supposed bad vocals on this album. Well, they are not great. They are actually pretty bad. But he and his vocals does not fully deserve this notoriety.

What is really bad though is their mangling of the Beatles classic Eleanor Rigby. They have got that song totally wrong. This is by far the worst version of this song I have ever heard.

Besides of that, this album offers up some pretty standard late 1960s and early 1970s German rock. A bit krautrock, but the music is too dull to be labeled krautrock. There is some symph prog, jazz and blues in their music.

The classical piece Italian Concert In Rock is a good, but far too short track. The rest of the album is a mix of dire and decent music. Streetmark was/is an obscure band for good reasons. They were simply not good enough.