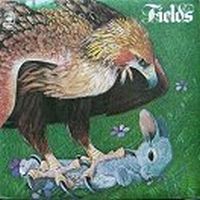 A British power trio with musicians from King Crimson and Rare Bird with a one off album.

Well, another shelved album has just been released through Esoteric. That was meant to be their second album, but their record label dropped the band and this album. The band is no more.

Fields is a forty minutes long album. The lineup is mellotron, organs, guitars, bass, drums and vocals. I have seen the music has been described as heavy prog. I am not so sure about that. The music is much more a mishmash of everything.

Everything here goes from classical music, symphonic prog, rock'n'roll, eclectic prog, folk rock and heavy prog. The band goes through it all and changes directions a lot during this album. Which is not a bad thing.

This album is an arch-typical British album from 1971, the year of excess all areas. Excesses also taken into albums like this.

The result is a mishmash of various ideas which is not always fully developed into a finished product. The instruments are everywhere and the listener gets bombarded with opposing themes all the time.

The end result though is a good album. A good and a very charming album. Sadly, their only album. This band had great potential, never to be fulfilled. Sad.