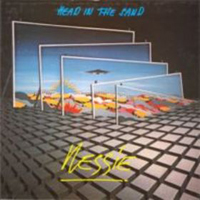 The second and final album from this Belgium band.

I reviewed their first album The Tree for ProgArchives back in November 2009. I have noticed I can almost word for word write the same review for this album too.

Nessie refers to the Loch Ness monster. Just to emphasize this, the album starts with some monster sounds. I am not sure if the real Nessie would approve of that, though. Nevertheless.......

Nessie was a four piece band and their music was somewhere in the symph and crossover prog genre. Their sound and music is sickly sweet with an almost psychedelic sound. That and some sickly sweet female choirs and male vocals. The instruments are not that much healthy either. Sugar, it is.

The instruments here are a bit guitars, lots of keyboards and mellotrons, piano, drums and bass. The music is on the overly dramatic totally over the top end of the scale. It feels like a parody at times. But I am afraid this band took their music and themselves seriously.

This album is in short a nice turkey with a horrible cover and even worse music. It flaps it's wings, but never takes of into the skies. Horrible is the word on this album.