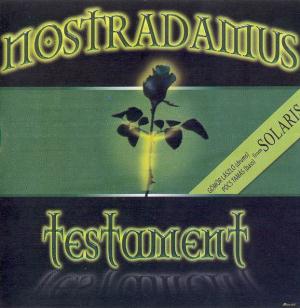 The one and only album from this Hungarian band with some Solaris members.

Nostradamus was a five piece band on this album. The line up was piccolo, alto flute, flute, keyboards, piano, guitars, bass, drums and some vocals. The vocals are in English.

My heart sinks a lot when I hear flutes and piccolo on the top of some gothic keyboards and guitars. Gothic music is too cheap and nasty. It is very much a show stopper in my case and I am starting to cringe.

It is still not an album I overall really like. Too gothic and too much full of old ideas from other bands. This is an album somewhere between decent and good. I hope Solaris is a better band than this band as I am about to review their albums.