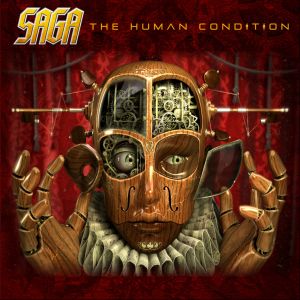 The 19th album from this Canadian band.

I guess this album will go down in the history as the album where Michael Sadler took a break and left the microphone to Rob Moratti. Michael was back on the microphone on the next album though.

The reason for his return is obvious when listening to this album. I am sorry Rob, but you don't belong in this band. Not as a vocalist. Saga without Michael Sadler is like Coca Cola without the black colour and the logo. Although Jim Gilmour and the Crichton brothers are still here, this album simply lacks the Saga trademark. It took me two listening sessions to get my head around the fact that this is a Saga album. Sort off....

This album is very heavy throughout. It does not have much colours and the trademarks a good Saga album got. It is full on all the time. No great vocals from Michael. That said, Rob Moratti is not a bad vocalist. He is actually a great vocalist. On this album, he is in the wrong place at the wrong time. He is much more suited as a prog metal vocalist. This album is a prog metal album in all but name. And that is not Saga. This band is not what it has been made to be on this album.

This album is also anonymous and toothless. Send this as a demo tape to any record label and the label will turn it down..... without even replying. This album does connect with me at all. It is a decent album though. It has some decent music. But it is only a Saga album by name and not by right.