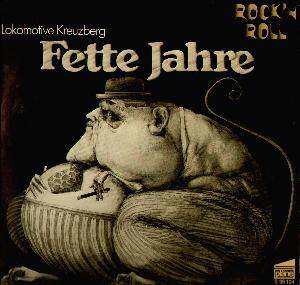 The fourth album from this rather strange left-wing German band who lived in West-Berlin, a stone throw from East-Germany.

They have rightly lumped this band into the krautrock genre although they are not playing what I would regard as traditional krautrock. The music here is a mix of folk/gypsy rock, a lot of theater and circus music, pop and rock. The music here is pretty much avant-garde too. The music never get the chance to overshadow the message, as expressed in the German lyrics. I spent the two years of German lessons peacefully asleep (30 years ago....) and my German is a bit rusty. But I gather that they are not overwhelming happy about capitalists, wars and the military. Which is fair enough.

The music is weird to say at least. Weird in a sense that it feels like a madman has written it. It is vaudeville with a lot of Eastern European influences. It is like cabaret music. This half an hour album is a cabaret.

The music is strangely enough pretty good. Not good, but it is a decent album. It is also an album nobody in their right mind would release today. This was the weird, weird 1970s and this album is a time capsule. It is in it's own right a fairly decent album. Hence my rating.