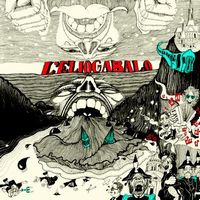 The only album from this Italian movie producer, author, actor and music teacher. He also released this album.

With his background, I am not surprised to having listen to a forty minutes long mainly theatrical album. Take a bit Area and Ange. Take a lot of acting, spoken words and dramatic vocals over some music produced by keyboards, bass, drums, guitars and numerous other instruments. The vocals are shouting and rather spoken male and female vocals. The vocals are in Italian and I don't understand much here.

The whole album sounds a bit street theatre and chaotic. There are some rather jazz music included here and some decent instrumental music. Most of it is chaos.

The end result is a fairly decent album. The first songs are rather good before the inmates of this mental asylum takes over and makes the rest of the album a bit of a waste of time. That is really all I can say about this rather obscure album.