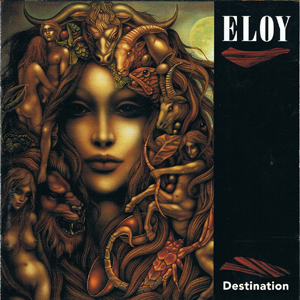 The 15th album from this German band. A band who had their best days in the 1970s.

The last two albums Codename Wildgeese and Ra was two pretty dire albums. Albums from a band who had given up the ghost and their self belief. They moved towards mainstream rock and pop. A music style which did not suit them at all.

Destination is another example of a misplaced piece of music. The tracks here follows a strict songs formula with verse-chorus-verse throughout. The music is 1990s rock with some ballads and some rather heavy songs too. A kind of Mr Big, Scorpions and those bands type of rock. There is no psychedelic or space rock here. Just some songs.

On it's own merit, this is not a bad album. It is a pretty decent album which shows promises. But it is not a good Eloy album or anywhere near good at all. It is only an album for collectors, I am afraid.