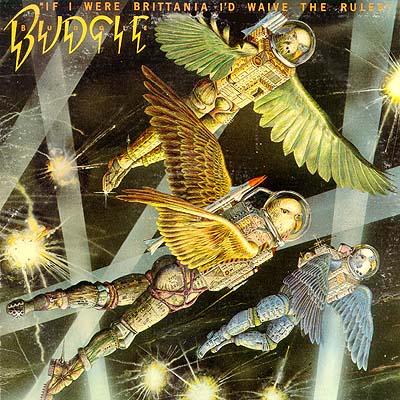 The sixth album from this Welsh band.

I have always regarded this Welsh power trio as being a very weird band whose most music are boogie hard rock, but who also strays far a field. Yes, their album comes across as hard rocking. But a pretty big percentage of them also showcases a very melodic side of the band. Not to mention, a very funky side of them. Which they do here.

The title track is hard rock. Most of the stuff here is hard rock. There are also some weird melodic stuff here. I am by no means a fan of hard rock, having got an overdose in a young age of hard and heavy metal. But in the case of Budgie, I really like their hard rock and is not so happy about their more melodic stuff.

The title track and Quaktor And Bureacrats is the best songs on this good album which showcases a band who still knows how to surprise their listeners. So much that I am getting a grudging respect for them.