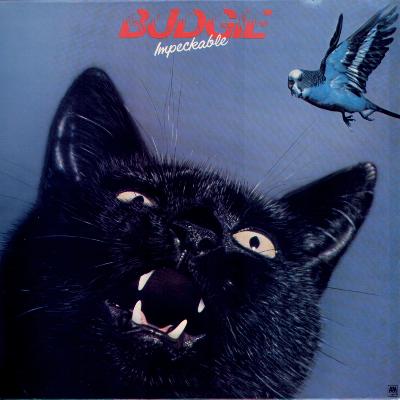 The sixth album from this Welsh power trio.

The band had gone through some pretty lows and highs up to this album. The high and lows was normally on the same album, only a few minutes apart. Listening to a Budgie album was like traversing the mountainous Welsh landscape with it's high peaks and deep valleys.

Well, the band has this time around managed to deliver an album which is without these big hills and deep valleys. The whole forty-five minutes of it is without any cringe-worthy stuff. Bravo !

The sound is really great this time around too. The riffs is really good too. And best of all, there is no really bad ballads here. The band has chosen a more funky and mainstream brand of hard rocking boogie this time around. The vocals, guitars, bass and drums is sitting there, basking in some very good riffs. There is a big red thread on this album. No flippant songs. This is a good rocking album who is also looking back towards rockabilly too.

There is no real great songs here though. It is still a good album from this band I am warming more and more towards. Investing some of my hard earned money was not such a waste of money after all...