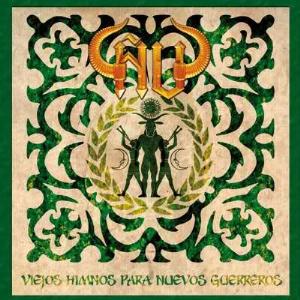 The 13th album from this Spanish band.

I have just heard & reviewed two of their albums. They have not left me much impressed and it is fairly fair to say that I will perhaps not review another Nu album again. The band comes across as too similar to Medina Azahara and Mago De Oz to really interest me.

We get folk rock with a lot of heavy metal influences and Spanish rock. They have been compared to Jethro Tull (= why I bought 3 albums) a lot. I cannot see why. Nu is very much based in the 1980s heavy metal scene. There are a lot of Skyclad references here. But the folk music they incorporate here is Spanish folk music and pop/rock.

There is too much heavy metal to really interest me here. I am by no means fan of 1980s heavy metal scene with the notable exception of Iron Maiden. When that is said, this album is a rather good album with violins and flutes in addition to the full heavy metal setup. The Spanish vocals are powerful and suits this music perfectly. That is the best I can say about this album which is not winning a new friend in me.