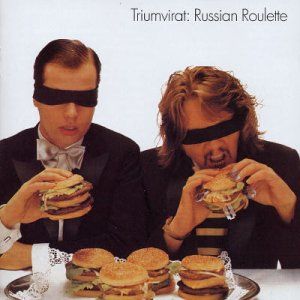 Triumvirat really morphed into a joke on this album. Gone is the ELP copycat and in comes a band who really only plays commercial rock with some Supertramp influences. That is; when Supertramp was really, really bad and obese on money and Colombian farming products. But this album is not as good as they were on their worst.

The music on Russian Roulette (strange...... Accept's flop album was also named Russian Roulette....... better stay away from this type of activity) is piano based pop with a lot of Las Vegas written all over it. The quality is really really abysmal and this album is an uber-turkey. The one near the top of the sofa, admiring the view of the ground one meter below.

The vocals deserves a special mentioning though. It is something that will replace the chasing cat in my nightmares, I believe. Utter, utter abysmal vocals. Is there a bullet in the chamber ?