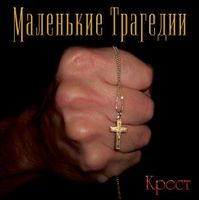 This Russian (mostly) one man band has released some albums during their time. Most of them sounding like a mad professor doing Keith Emerson impersinations. To a large degree, that is what Little Tragedies is all about.

The Cross on the other hand is a deviance from the norm. Most tracks here are songs. Proper songs with Russian vocals and based on some Russian folk songs, it sounds like. And yes, the album also takes one or two detours into ELP land too. But most of the album is proper songs...... very much to my amazement.

I would not say the result is great. But this album works and it is both refreshing and very good to hear those Russian songs. Russia has nothing to be ashamed off when it comes to culture. Something this album proves.
The long instrumental tracks are a bit tedious though and not on par with the songs. But well over half of this album is very good and the rest is merely so-so. I would though recommend this album for those who want something different from the symphonic prog genre. This is another good product from Russia. More of this and less vodka, please.