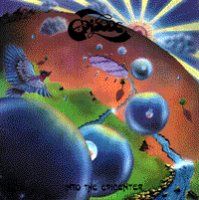 An US band who released two albums and then disappeared again. This is their debut album.

I do not know much about this band so let's move straight to the music. A type of symphonic, flowery almost hippie like folk rock influenced prog. The main vocals are female vocals and her name is Roe Tyler. Although she is not hitting the high notes, her vocals is superb and efficient for the music Episode is churning out here.

The music is at times very soft and elegant. There are also some slight avant-garde stuff here which is breaking up an album that would had been too toothless without these interventions. There are also some Kansas like symphonic prog here too. The main instruments are keyboards/synths, guitars, drums and bass.

Into The Epicenter is an album that has really grown on me. It has also really impressed me. The sound is too much 1980s for my liking and there is no really killer tracks here although the opening track Riding the Falls is a superb track. The rest of the tracks is great though and I am really impressed by this album. Check out this obscure gemstone in a scene full of gravel.