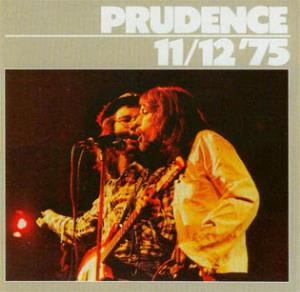 Prudence is probably an unknown name to most of you, even you Norwegians. But this Norwegian band released four studio albums and were both the hardest and mostly the only touring Norwegian rock'n'roll band in Norway between 1970 and 1975. There is not a public building and not a village in Norway where Prudence has not gigged.

Prudence was also Åge Aleksandersen's first serious band. He is widely recogniced as the godfather of Norwegian rock music and he has released some really good albums on his own. Terje Tysland, another excellent musician were also a member of Prudence. This band were a battleground between their two pretty massive egos. They are good friends today, but they spilt some blood during their time in Prudence when they locked horns. Both are very much present on this live album.

When it comes to their music, it is a bit difficult to pinpoint. But The Band and Jethro Tull is a very good reference. Prudence though was their own masters and they created their own sound and identity. Their studio albums are pretty good and very much well worth checking out.

In 1975, the band had got enough of each other. Terje Tysland and  Åge Aleksandersen had kicked each other's bum too many times. The band had lost their last illusions and gave up the ghost. They played their final gig 11. December 1975 and this live album is their final release.

This live album is very much a live album with audience participation and songs fleshed out in a live setting. The sound is very good. A sad, melancholic ambience is pretty evident throughout this album. In particular on Terje Tysland's excellent guitar solo on the final track Takk Te Dokk which plays Prudence out of the scene and into history. It is hard not to feel sad during that guitar solo.

This live album is not their greatest hits album though. It includes some glaring omissions, I would say. Yes, I do have their studio albums. But it is a good documentary about a band who I think deserves a bit more attention and admiration. Prudence were not perfect by any means. But they still deserve a lot of credit. And so does this live album with all it's failings and the good songs too. A strong three and a half points is awarded.