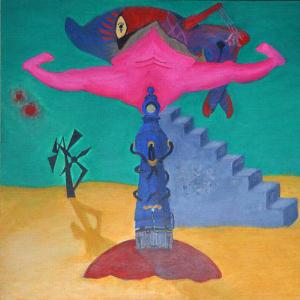 The debut album from this band from Argentina and a free download too.

Labelled as a Crossover band, this album is taking a lot from Gentle Giant and King Crimson as from modern US bands like Advent. But there is also a lot of folk music here as in Jethro Tull and some Italian influences in addition to a lot of jazz. In truth, this is crossover, but not as in a crossover between prog and rock. The music is very complex throughout and a bit difficult to really grasp and get a take on.

The music is based on some rampant Hammond like organs, bass, drums and some guitars. The vocals are great and I have no complaints about the musicianship. The music is pretty understated and the bands gets their music across with a minimum of instruments.

The overall quality is good. I am missing some truly great songs here though. The band have their own identity, but has not really managed to get into full bloom on this album. But the band has a lot of potential and this is their debut album. Do expect a lot of great things from this band.