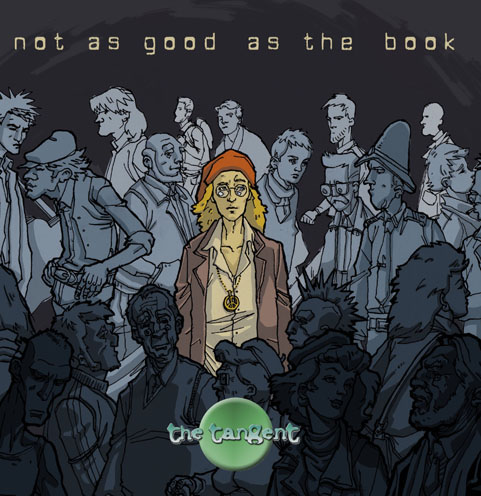 (published in 2008 at ProgArchives)

Until three months ago, I had never heard about this band. Yes, I am a prog-newbie with both my eyes firmly rooted on the big albums from 1968 - 1980. What an ignorant ***** I am....... !! Somehow; I believe this album will also shift a lot of albums from The Tangent's back-catalogue.......... Today, I ordered the first two The Tangent albums and I am already the owner of A Place In The Que and Going Off On One. Both of them are great albums. The reason is that Not As Good As The Book is simply a masterpiece. It is probably this century's The Lamb Lies Down On Broadway. Why ? In my view because this album is epic and with a wide diversities of styles. From the wimsy Canterbury prog to symphonic prog and the 1970's eclectic prog scene. I find a lot of references to bands like Caravan, King Crimson, Yes, Genesis, Hatfield & The North and even Van Der Graaf Generator. This album is like taking all the great british prog rock bands and merge them into one unity; this album. It is that diverse. This album is therefore very interesting with twists and turns who glue me as a listener to every tone of this album. Most of all; it also have some great songs and fantastic musicianship. Some of the music here is the best prog rock I have ever heard in my life. As simple as that. I do not think everything on this album is fantastic. Neither do I think The Lamb is fantastic throughout. But I will still regard both albums as masterpieces with long lives in my music collection. I am absolute convinced that Not As Good As The Book will establish itself as a pillar in progressive rock. An album which we will talk about for the next 30-40 years. It is our century's The Lamb Lies Down On Broadway.