Different Strings - The Sounds of Silence Part 1: The Counterparts (2011) 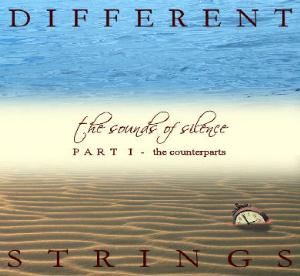 Different Strings is a band from Malta. The name of the band seems to be a nod towards Rush. The music is not. The music is art rock, some sort of. Art rock of the more symphonic kind. There is also a lot of Italian type pop music here and some jazz. Some prog metal influences is also detectable.

The vocals here is an aquired taste. It does feels like the music has been composed on a piano. There is a lot of nods towards the great piano men on this album. The instrumentation is pretty standard though with a wide variety of tangents, some guitars, some sampled violins, bass and drums.

The ambitions behind this album is huge. Just look at the artwork to get my drift. An half an hour long song also speaks volumes. There are also some really great stuff on this album. But there is also some merely half decent stuff here too. I don't feel the result is as good as the ambitions behind this album and that is the downfall of it. It is still a good album well worth checking out. But it falls a bit short in my view.