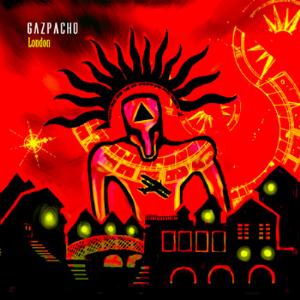 I have to admit I have been struggling with Gazpacho's music since I discovered them a few years ago. They are one of Norway's finest bands at the moment, but I have never really warmed to their music.

Their Missa Atropos opus, which this live album is based on, was a really good album. I suspect my frosty attitude towards their music was melting away during the review process of that album. When I purchased this live album, one of the final physical albums I have purchased before introducing a no-more-purchases policy due to lack of space in my flat, I was ready to wave the white flag.

Oh boy does this live album makes my arms ache due to all this waving.

London is a 2 CDs, two hours long live album with some really great tracks, great sound and brilliant musicianship. Gazpacho's music is somewhere between Radiohead and Marillion (Hogarth era). For me, Gazpacho is the leading band in this neo-art rock genre which has swept over Europe during the last years. This is Hogarth era Marillion adoring bands who has fused them and Radiohead into one sound. There are some notable other bands too in this new genre..... but their names escapes me.

London is two hours of long, lingering and catchy neo-art rock. This is the type of music which makes you relax and enjoy. Which is exactly what I am doing now. It is by all standards a great live album with no weak tracks but where a real killer track or two is missing. Hence my four points award. And yes, Gazpacho has finally won me over. Don't be as frosty as I was. Discover this great band yourself. And a brand new album has just been released.