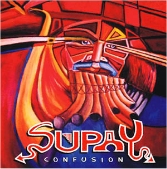 The debut album from this Peru based band.

The west coast of South America has got some pretty good folk rock bands now. I spotted an advert for a two days long folk rock festival in Chile this summer and the list of bands were impressive. Supay is one of the big names on that festival and I wanted to check their albums out. Hence this review.

Several people I know has commented that this album is a meeting between two cultures. The Western rock culture from the early 1970s and the timeless Inca culture from South America. I think this is an excellent comment on this album. The guitarist goes on several long guitar solos. The pan flutes drags us back to Peru again. This makes it more a meeting than a clash because those two cultures goes well together on this forty minutes long album.