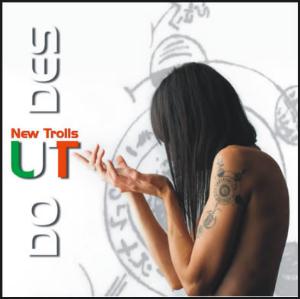 Album number eighteen from this Italian band. A band whose album debut was in 1968. That is some years ago. Forty-five years to be precise.

The band is more or less back to where they started too. Vittori Di Scalzi is not involved in this album and the same goes for all those who did the 2007 album Concerto Grosso, The Seven Seasons. Gianni Belleno from the debut album forty-five years ago plays in this, the 2013 version of New Trolls. Another album was also released in 2013 by New Trolls, but probably not with this line-up of New Trolls. Confused ? So am I !

The music is on this album is a mix of Italian pop and mainstream pomp rock with a big sound and overlays of instruments. That means classical orchestra, guitars, keyboards, bass, drums and Italian vocals. This is called adult pop by many. A lot of this music is pretty light weight with not many details to be happy about. It is in essence an Italian pop album. The inclusion of a rather poor English vocals AOR song at the end of the album does not really lift the quality of this album. This is a decent album and nothing more than that. Don't get this album if you want to find out what this band is all about.