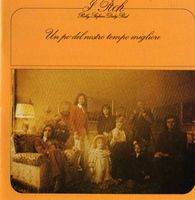 The seventh album from one of the oldest still going strong bands in Italy.

The band started out as a pop-beat band back in the 1960s and.... well.... continued down the same road more or less the whole career. A career not yet completed.

We are in essence talking about an Italian pop album here. Pop with a lot of Italian prog rock influences. You get the Italian vocals, the symphony orchestra sound, some guitars, bass, drums and the keyboards. The sound is very soft and ancient 1970s. Well, late 1960s, really. You get this movie soundtrack epic stuff in between the more pop songs. This is epic pomp pop throughout the album. In particular on the good final epic track Il Tempo Una Donna La Citta. The only really good track here.

The overall quality is decent though. The sound so ancient that it really reminds me about the various melody festivals which dominated this scene back then. Melody festivals this band were taking part in. I am afraid this album is not really for me.