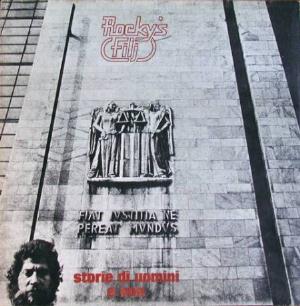 Another Italian band who released one album and then disappeared again without a trace.

The Italian prog rock scene in the 1970s were as strong and diverse at it is today. Some bands back then still had one foot in the 1960s blues, beat and soul scene. Others again had moved onto a much more prog rock sound in the vein of ELP and Genesis.

Rocky's Filj were soundly rooted in the soul, beat and blues scene from the 1960s. Add a lot of Italian pop and some Italian symphonic prog too. Then you get this thirty-six minutes long album.
There is a lot of woodwinds on this album and most of the music is in the jazz and soul category. There are also a lot of guitars, bass and drums here. Some keyboards and some really great Italian vocals fills in the rest.

The end result is a bit of a complex albums with a lot of facets and colours. It does not really have any great tracks though and that is a problem with this album. It is a good album though and well worth checking out.