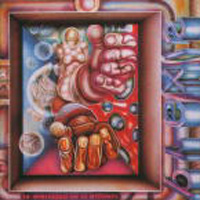 The one and only sign of life from this Mexican band.

Mexico has had a rather big progressive rock scene from the 1970s until most recent. Obscure bands who released obscure albums. Albums impossible to find in commercial sale. I had to lift this one from Youtube together with some other similar obscure albums from similar obscure bands. I hope I am forgiven as this album is used for review purposes.

The music on this album is wholly instrumental, performed by keyboards, guitars, bass and drums. It is pretty obvious that this is a 1980s album as the sound has this 1980s sound. The guitar sound is not good at all. The keyboards sound is more to my liking.

The opening track Al Filo Del Abismo is a very good majestic symphonic prog track. I really like that track. The rest of the album continues in a more less defined eclectic prog. There are some mediocre material here. But my overall impression is that this is a good album, well worth checking out.