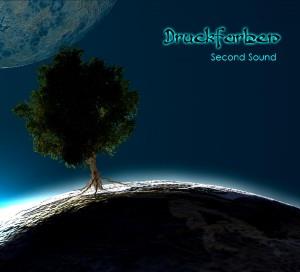 Druckfarben was with a lot of justification being labeled as a Yes copycat on their first album. I was one of them who stamped Yes copycat all over their debut album. A very good album, btw.

Undeterred, Druckfarben has returned with another album. And again, I think the Yes clone/copycat will be difficult to avoid. I am not so sure this is the case this time around, though. At least when overcoming the first three songs.

There is no denying that the band is very much Yes influenced and that the album is very much structured as a Yes album. But, and there is a but here..... They have also veered both towards Kansas and eclectic prog here. The music is very complex at times. The title track is the main proof of that. A very complex, symphonic and yet melodic eighteen minutes long track. Druckfarben's vocalist Phil Naro sounds like Jon Anderson throughout and would be a great Yes vocalist if Jon Davidson is not up to the job. I still think Phil Naro should stick to Druckfarben though as this band is the future and not the past.

The other Druckfarben's musicians is like Yes. No less, no more. I love their keyboards sound as much as I love Yes keyboards sound. If anything, I think Druckfarben has nailed down that sound better than Yes ever did. Their guitars are more in the Kansas vein than like Steve Howe.

The music is great throughout and Druckfarben has stepped out of the long shadows of Yes on this album. I love the title track and the opening track An Answer Dreaming. This album has all the hallmarks of a great symphonic prog album and I am in no doubts that Druckfarben is one of the great hopes of this scene. Just ignore the Yes clones accusations and get this album. OK ?