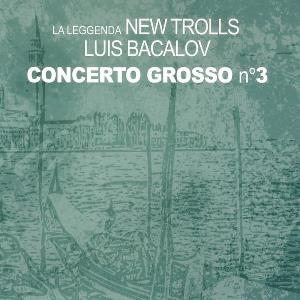 The nineteenth album from this Italian band.

With the other New Trolls album with a different lineup this year in mind, I wonder who and what is New Trolls these days. Two bands is using this name and the sound and music is very different from each other. A total mess in other words.

No matter who is who and what is what, this album is in that Concerto Grosso series of albums the band, whoever that is, has released since the 1970s. The first one in 1971 and the second one in 1976.

Those who were expecting a concerto grosso with symphony orchestra with all the whistles and bells will again be disappointed. Their second installment of the series back in 1976 was a mix of fish and birds. A mix of symphony orchestra and Italian pop music. Ditto for this album too. The same formula.

Vittorio De Scalzi is very much present here on this album and he has got help from numerous others too. Probably veterans in the scene. I am not that much into the history around New Trolls. It is confusing to say at least. But you get everything on this album.

You also get some very good melodies too. Some really good songs and pieces of music. This is by far the best installment of this concerto grosso series, I believe. It is years since I have been listening to the first one though. But the pop and rock melodies here, with Italian vocals, is really very good. I am really surprised !

This exactly one hour long album is a bit of a mess, yes. But a very good mess and a very good album too. I hope nobody else copies New Trolls and this album, though. Albums like this is a trial by fire for a reviewer and most listeners. Nevertheless........