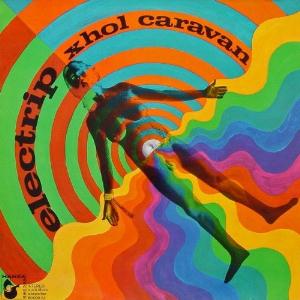 Xhol Caravan, also called Xhol, released three studio albums and five live albums (three of them posthumous) during their far too short career. They are regarded as one of the fathers of the Krautrock genre. Much due to this album, their second album.

Krautrock is not the first thing I knotted down on my notepad when listening to this album. Soft Machine was the first thing I knotted down. All the music on this album, with the exception of a short blues rock interlude, has the typical Soft Machine intensity and mood. The intense keyboards and woodwinds reminds me a lot about Mike Ratledge and Elton Dean in Soft Machine. Then again, there is a lot of krautrock too on this album. The intense space rock runs is the typical krautrock trademarks.

All songs are instrumentals, with the exception of some vocals on the blues rock interlude and the short two bonus tracks Planet Earth and So Down. The main instruments here are woodwinds, keyboards, bass and drums.

Intense, spaced out and avant-garde is the three things I will remember this album for. The quality of the songs are great too. The first three tracks Electric Fun Fair, Pop Games and All Green is great workouts. The seventeen minutes long Raise Up High opens with a blues workout before reverting into avant-garde Soft Machine @ Third territory. Not copycats, but in the same spirit. From there on and out, the album is in the same vein. The two short bonus tack is the weakest tracks here by far.

This album is one of my alltime favourite krautrock albums. It is only let down by the two bonus tracks. But it is still a great album and one to check out.