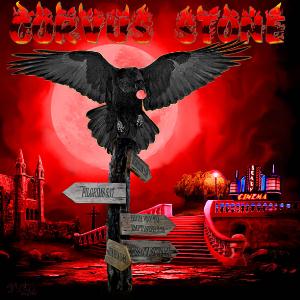 The debut album from an online band with members from BunChakeze, Road to Avalon, Raven and a couple of other bands. Corvus Stone is therefore more a project than a band. To my knowledge, the bandmembers has never met each other, face to face. There is no plans to do gigs.
Welcome to the prog world anno 2012. The world of broadband and gigabytes.

I was mentioning this because this album is influenced by the wonders of long distance writing and recording of an album. That means an eighty minutes long album like this.

The instruments used here is guitars, keyboards, bass and drums and some vocals. The sound is OK, digital and not organic. The music here is very much a digital band release with a lot of ideas spread over eighty minutes. Good ideas which could and should have been distilled/edited down to much more suitable lenght. There is a lot of aimless wandering around on this album. It feels like waiting around in a living room for your woman to get dressed up for a night out. Not the most sparkling passionate time in a relationship.
The aimless wandering around is mainly done in a landscape between fusion and symphonic prog. The album is sailing very close to being a bit lounge music at times. And that is not a compliment.

The best song on this album is the Black Widow cover You’re So Wrong. That song feels a bit misplaced on this album which seriously drifts a bit rudderless on an open ocean. Get a producer or a serious editing programme next time.

In short; a lot of good ideas spread too thin throughout eighty minutes. A good attempt and something to build on.